Climate catastrophe is now looking inevitable. We have simply left it too late to hold rising global temperatures to under 1.5C and so prevent a future of drowned coasts, ruined coral reefs, spreading deserts and melted glaciers.

At the same time, prospects of reaching global deals to halt emissions have been weakened by the spread of rightwing populism.

Svetlana Jevrejeva, at the National Oceanography Centre, Liverpool, has studied sea-level rises that will be triggered by melting ice sheets and expanding warm seawater in a world 3-5C hotter than it was in pre-industrial times, and concludes these could reach 0.74 to 1.8 metres by 2100. This would be enough to deluge Pacific and Indian Ocean island states and displace millions from Miami, Guangzhou, Mumbai and other low-lying cities. The total cost to the planet could top £11trillion.

Earth’s population stands at seven billion today and is predicted to rise to nine billion by 2050 and settle at over 11 billion by 2100 – when climate change will have wrecked major ecosystems and turned farmlands to dust bowls.

Unfortunately many experts believe Earth’s population will actually peak well beyond 11 billion. “It could reach 15 billion,” said Sarah Harper, of Oxford’s Institute of Population Ageing. “All sorts of factors suggest women, particularly in sub-Saharan Africa, will still want to have relatively high numbers of children and this might keep the world’s population approaching 15 billion rather than 12 billion.”

In the past few years climate change has killed 70% of its livestock and forced tens of thousands of families to flee from its scorched interior to live in refugee camps. “You can touch it, the climate change, in Somaliland. It is real. It is here,” the country’s environment minister, Shukri Ismail Bandare, said in the Financial Times last week.

Sudan and Kenya are also victims of a drought that has dried the Horn of Africa faster than at any other time in the past 2,000 years. Similarly, in Vietnam, thousands a year are abandoning the once fertile Mekong Delta as rising seawater pollutes paddy fields. By 2050, the World Bank says more than 140 million will become climate refugees.

But the most telling example is provided by the US, which has emitted about a third of the carbon responsible for global warming. Yet it has essentially done nothing to check its annual rises in output. Lobbying by the fossil fuel industry has proved highly effective at blocking political change – a point most recently demonstrated by groups such as the Competitive Enterprise Institute and the Heartland Institute, which helped persuade President Trump to pull out of the Paris agreement, thus dashing the planet’s last hope of ecological salvation. “The coalition used its power to slow us down precisely at the moment when we needed to speed up,” said the environmentalist Bill McKibben in the New Yorker. “As a result, the particular politics of one country for one half-century will have changed the geological history of the Earth.”

No region of the US has more to lose from climate change than southern Florida. If scientists’ worst predictions are realised, an entire metropolitan area, currently inhabited by more than six million people, is likely to be swamped by a 1.5-metre sea-level rise before the end of this century, a rise that could see the tourist mecca of Miami simply disappear.

It’s a doomsday scenario that has united the leaders of Miami-Dade county and the cities of Miami and Miami Beach in an attempt to find solutions to the most severe effects of rising oceans before it is too late. Their plan to combat the physical, economic and social challenges of climate change, as part of the global 100 Resilient Cities programme, will play a key role in determining whether the low-lying region will still be habitable in the coming decades or surrendered to the ever-rising Atlantic.

“It’s a problem that can be managed, it’s not a problem that can be fixed and you walk away from,” said Susanne Torriente, chief resilience officer for Miami Beach, where hundreds of millions of taxpayers’ dollars have already been spent elevating roads, constructing higher sea walls and investing in modern, high-capacity pumps and stormwater drainage systems.

“Every generation will add to the work that we have begun,” Torriente says. “We are always learning, it’s a constant process of learning, re-evaluating and improving.”

Read the complete article on The Guardian news site here.

How Shanghai would look with a rise of just 2C: the UN warned this week of a potential 3C scenario. Photograph: Nickolay Lamm/Courtesy Climate Central

Hundreds of millions of urban dwellers around the world face their cities being inundated by rising seawaters if latest UN warnings that the world is on course for 3C of global warming come true, according to a Guardian data analysis.

Data from the Climate Central group of scientists analysed by Guardian journalists shows that 3C of global warming would ultimately lock in irreversible sea-level rises of perhaps two metres. Cities from Shanghai to Alexandria, and Rio to Osaka are among the worst affected. Miami would be inundated – as would the entire bottom third of the US state of Florida. 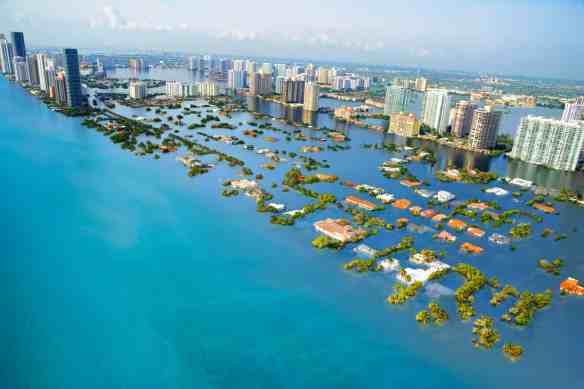 In Miami – which would be almost entirely below sea level even at 2C warming – the sense of urgency is evident at city hall, where commissioners are asking voters to approve a “Miami Forever” bond in the November ballot that includes $192m for upgrading pump stations, expanding drainage systems, elevating roads and building dykes.

A 3C rise would lead to longer droughts, fiercer hurricanes and lock in sea-level rises that would redraw many coastlines. Depending on the speed at which icecaps and glaciers melt, this could take decades or more than a century.

At least 275 million city dwellers live in vulnerable areas, the majority of them in Asian coastal megacities and industrial hubs such as Shanghai, Shenzhen, Bangkok and Tokyo.

Japan’s second biggest city, Osaka, is projected to lose its business and entertainments districts of Umeda and Namba unless global emissions are forced down or flood defences are built up. Officials are reluctantly accepting they must now put more effort into the latter.

Read the complete article on The Guardian newspaper site. 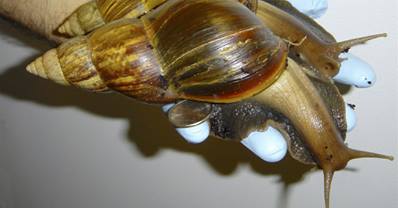 In the 1960’s a boy vacationing with his family in Hawaii had pocketed a few giant African land snails (Lissachatina fulica), a mollusk that grows to a foot long and a full pound. Hawaii had been battling the pest, and so too would Florida, where the boy returned with his new friends. Once home, he quickly grew bored of the snails and handed them over to his grandmother, who set them free in her backyard.

But what about the ‘sex-crazed’ part of the story?

You see, the giant African land snail is a hermaphroditic love machine. “Snails have female bits and male bits,” explained biologist Robert Cowie of the University of Hawaii, “a single pore, through which if you’re acting as a male, a penis extrudes, or if you’re acting as a female, through which the other snail puts its penis in. And in some cases they can do it reciprocally.”

Thus the giant snail never meets another snail it can’t get busy with. Once fertilized, the snail will bury several hundred eggs a few inches below ground, and because of the incredible size of the species, the young will emerge far larger than native varieties, making them that much more resistant to predation.

Today, Miami is simply overrun with the things. Not only do the giant snails chow on some 500 economically important plants in the area, they’re devouring houses. It seems they have a taste for stucco, which contains precious calcium. Without a ready supply of the stuff to fuel their amazing growth, they’ll simply turn on each other — at least in captivity.

Cowie knows all too well the explosive population growth these things are capable of when left unchecked. In Hawaii, where he lives, the giant African land snail was introduced in the 1930s by Japanese immigrants who wanted to keep them as pets. They have since essentially assumed ecological control, tearing through agriculture and muscling out native species.

Speaking of agriculture, all manner of critters could very easily end up in your Caesar salad, for instance, since cooks don’t always peel apart the lettuce before chopping it. “And it could just as well be a little baby African snail,” said Cowie. “OK, it’s a bit crunchy, but so is the lettuce a bit crunchy, and you’d never know. So that’s the way people generally get infected in places where they don’t habitually eat raw snails.” 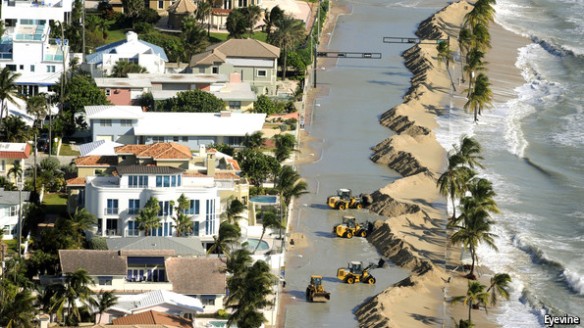 Image from The Economist magazine.

I lived for a few years in a home on Vancouver Island a few feet from the ocean, and had an interest in global warming increasingly creeping water up towards home during the coming years.

Lately, I’ve seen more and more waterfront homes coming on the market for $4-28 million dollars. Maybe these owners are deciding to get out while the getting is good.

Even as seas have risen over the past century, Americans have rushed to build homes near the beach. Storms that lash the modern American coastline cause more economic damage than their predecessors because there is more to destroy. The Great Miami Hurricane of 1926, a Category 4 storm, caused $1 billion-worth of damage in current dollars. Were it to strike today the insured losses would be $125 billion, reckons AIR Worldwide, a catastrophe-modelling firm. In 1992 Hurricane Andrew, a Category 5 storm, caused $23 billion in damage; today it would be twice that.

The Economist magazine has a great article titled “You’re going to get wet”. Well worth reading.

Get it at Apple